Southwestern Pennsylvania is poised to become a petrochemical and manufacturing world leader. Interest in how Marcellus & Utica Shale could transform Southwestern Pennsylvania into a chemical and manufacturing powerhouse was accelerated during the Energy Inc. Conference and Tradeshow, presented by Range Resources at the David L. Lawrence Convention Center in Pittsburgh, on Tuesday August 14th.

Speakers from the federal, state and local government, along with representatives from upstream, downstream and the energy supply chain, including Dr. Paul Ayoub, project manager for Shell’s new business development, and Charles McConnell, assistant secretary for fossil energy at the U.S. Department of Energy, spoke on the potential ethane cracker site in Beaver County, selected earlier this year as the preferred site being studied by Royal Dutch Shell. The cracker would operate using ethane produced from Shale gas drilling and produce more than a million tons of ethylene a year. This “game changing” discovery of natural gas in the Marcellus & Utica Shale is being seen as a catalyst for the rest of the chemical industry.

Among the reasons the potential petrochemical complex is being considered for development on the 300-acre brownfield site in Beaver County are road and rail transportation infrastructure, five electric plants that operate in the area and access to water resources, over and above the fact wet gas can be found underneath the area.

Patrick Sentner SIOR and David Thor LEED AP of Colliers International | Pittsburgh attended the Energy Inc. Conference and Tradeshow. “Our firm has been very active in the local and national energy sector,: said Patrick Sentner SIOR, Founding Principal at Colliers International | Pittsburgh, “and our enthusiasm in this business sector in the tri-state area was reinforced by what we learned at the conference.”

END_OF_DOCUMENT_TOKEN_TO_BE_REPLACED

Comments Off on Energy Inc. Conference and Tradeshow Accelerates Discussion on Future of Marcellus & Utica Shale in the Tri-State Area

Call it convenience or say its selection, consumers are purchasing their consumables in establishments other than traditional grocery stores. General merchandising chains, warehouse clubs, dollar stores and drugstores are catering to a transformed consumer who is trending toward the one-stop shopping experience. Retailtrafficmag.org  reports as multiple retail operators add grocery products to their shelves, traditional supermarket chains have found themselves squeezed in their own market segment. At the same time, the ever-widening pool of upscale and organic supermarkets are providing more choices to well-to-do shoppers unswayed by Wal-Mart’s prices.

END_OF_DOCUMENT_TOKEN_TO_BE_REPLACED 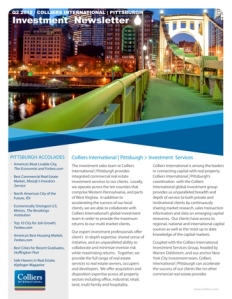 The investment sales team at Colliers International | Pittsburgh provides integrated commercial real estate investment services to our clients.  Locally, we operate across the ten counties that comprise Western Pennsylvania, and parts of West Virginia.  In addition to accelerating the success of our local clients, we are able to collaborate with Colliers International’s global investment team in order to provide the maximum returns to our multi-market clients.

Our expert investment professionals offer client’s in-depth expertise, shared sense of initiative, and an unparalleled ability to collaborate and minimize investor risk while maximizing returns. Together, we provide the full range of real estate services to real estate owners, occupiers and developers. We offer acquisition and disposition expertise across all property sectors including office, industrial, retail, land, multi-family and hospitality.

“The Pittsburgh investment market is the strongest it has been in years due to extremely low vacancy rates and positive net absorption trends across almost all major sectors.  Accordingly, Pittsburgh has been able to attract an increasing number of institutional investors,” said Luke Hingson MRED, Associate at Colliers International | Pittsburgh.