Colliers International | Pittsburgh is proud to announce the sale of the former corporate headquarters for Iron City Constructors located at 109 Pleasant Drive. The property was sold by MV Holdings for $1,300,000 to an undisclosed buyer. 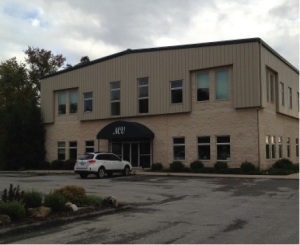 The 3-story building was built in 2001 and is located just off of the I-376 exit, minutes from the Pittsburgh International Airport and Beaver Valley Mall.

“This is a significant transaction for the Beaver County market.  There just are not many non industrial sites that will sell for such a significant number,” said Anthony Pantoni a Beaver County native. “We have always considered Beaver County to be an area of growth for commercial real estate. I am pleased to be able to continue to work in an area I know so well. With the continued increase in demand created by the Marcellus and Utica Shale gas supply, we see nothing but great things for this entire market.”

END_OF_DOCUMENT_TOKEN_TO_BE_REPLACED 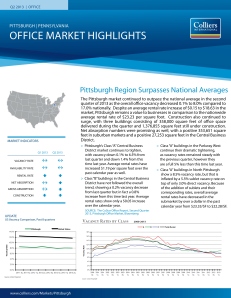 The Pittsburgh market continued to outpace the national average in the second quarter of 2013    as the overall office vacancy decreased 0.1% to 8.0% compared to 17.0% nationally. Despite an average rental rate increase of $0.15 to $18.63 in the market, Pittsburgh remains a value to businesses in comparison to the nationwide average rental rate of $23.23 per square foot. Construction also continued to surge, with three buildings consisting of 358,000 square feet of office space delivered during the quarter and 1,376,855 square feet still under construction. Net absorption numbers were promising as well, with a positive 353,651 square feet in suburban markets and a positive 27,253 square feet in the Central Business
District.

Learn more about Q2 2013 activity in the Pittsburgh office market.

More than 1,500,000 square feet of Class “B” and “C” office space has been taken off the market for conversion into residential and hospitality uses in the past couple of years. During this time, the former state office building, the Clark Building, the former Alcoa Headquarters, the former Verizon Building and 526 Penn Avenue have all been sold and either converted into residential use, or are awaiting redevelopment. 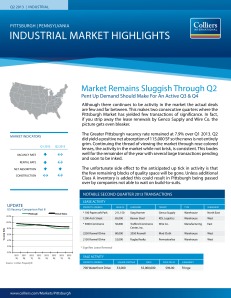 Market Remains Sluggish Through Q2
Pent Up Demand Should Make For An Active Q3 & Q4
Although there continues to be activity in the market the actual deals are few and far between. This makes two consecutive quarters where the Pittsburgh Market has yielded few transactions of significance. In fact, if you strip away the lease renewals by Genco Supply and Wire Co. the picture gets even bleaker.

The Greater Pittsburgh vacancy rate remained at 7.9% over Q1 2013. Q2 did yield a positive net absorption of 115,000 SF so the news is not entirely grim. Continuing the thread of viewing the market through rose colored lenses, the activity in the market while not brisk, is consistent. This bodes well for the remainder of the year with several large transactions pending and soon to be inked.

The unfortunate side effect to the anticipated up tick in activity is that the few remaining blocks of quality space will be gone. Unless additional Class A inventory is added this could result in Pittsburgh being passed over by companies not able to wait on build-to-suits.

“The YLG Riverhounds and New Market Tax Credit event was incredibly successful, with well over 50 real estate professionals in attendance,” said Luke Hingson, Industrial Services Specialist at Colliers International | Pittsburgh. “The event, which was free as a result of Colliers International | Pittsburgh’s generous sponsorship, was a great chance for our firm to give back to both the Urban Land Institute and the local real estate community as a whole.” END_OF_DOCUMENT_TOKEN_TO_BE_REPLACED