Centre City Tower is the largest of three office buildings owned by King Penguin in the city. The other two buildings (The Pittsburgher and The Allegheny Building) will remain with King Penguin as they continue to look for more opportunities to expand their portfolio within the Pittsburgh market. Jennifer Faines, a spokeswoman for King Penguin, confirmed that the company is looking to “reposition” its portfolio and restructure some of their assets.

This sale will come at a great time for the Downtown office market, as office building sales have been relatively dormant over the past year. The biggest sale in 2018 came when the City of Pittsburgh purchased the 155,000 square foot former Art Institute building for $27 million.

Centre City Tower will be hitting the market without a list price, which is part of the sales strategy, said Regional Principal, Broujos. “We’re going to see how high the interest level is before (establishing a call-for-offers date).”

Broujos also believes the size of the building will attract interest from buyers worldwide. With floorplates of more than 12,000 square feet and ongoing building updates, “we continue to see interest from outside the market for buildings of this size.”

The building has seen several recent commitments for long-term leases, leaving it around 72 percent occupied.  A new café, “The Grind” will feature outdoor seating and  is set to open in the near future on the first floor of Centre City Tower.

Every year, the Allegheny Conference and Pittsburgh Regional Alliance release a Business Investment Scorecard for the Pittsburgh region. The scorecard serves as a data snapshot of Pittsburgh’s economic development progress while highlighting specific changes in the region’s investment landscape.  The scores are created by taking into account regional investment deals, capital expenditures and new and retained jobs across the 10-county region. A total of 340 deals were tracked in 2018; which beats the previous record of 308 deals back in 2007.

The scorecard paints a promising picture for the Pittsburgh region. The amount of jobs in our region increased for the 4th straight year. 2018 saw 7,660 new jobs added to the market, a 15% rise from 2017. 2,886 of those jobs fell in the Information Technology and robotics category.

For the second year in a row, Pittsburgh’s IT sector was the most active for investment deals, with a 51% increase in activity from the previous scorecard. IT employees in the Pittsburgh region can expect to see wages 94.5% higher than the average job wage in the region.

The second most active sector for deals across Southwestern PA was manufacturing. Jobs in this industry raised 62% from 2017, for a total of 4,000 new jobs. American Textile Company, Ellwood Quality Steel (EQS) and Bergad, Inc. all expanded within the market, thus bringing almost 150 new jobs to Pittsburgh.

Pittsburgh’s number one contributor to the National Gross Domestic Product (GDP) were deals in finance and business services. These industries were also the regions largest employer with over 230,000 total personnel. Bombardier Transportation, Bechtel Plant Machinery and Roadrunner Recycling all expanded within the region in 2018.

This scorecard gives investors a glimpse into the future and confidently demonstrates how Pittsburgh continues to thrive in different sectors.

Comments Off on Pittsburgh Earns Highest Investment Score Since 2007

Yesterday, the Colliers International | Pittsburgh Agency Team of Paul Horan and Ed Lawrence, along with Sippel Enterprises, held a broker event at Waterfront Corporate Park. This event gave brokers the opportunity to view the available suites in Waterfront Building 2 while enjoying lunch catered by Beyond Parsley.

One of the features that sets Waterfront Corporate Park apart from other office park settings is the putting green adjacent to Building 2. Before taking a tour, the attending brokers were able to test their golf skills by attempting to sink a 15-foot putt for the chance to win a prize. 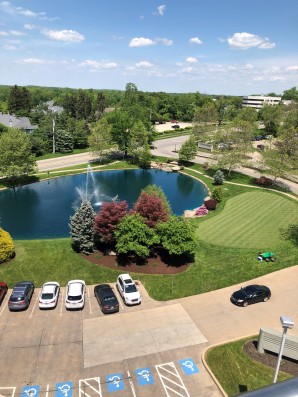 Each attendee received one practice shot, followed by three official attempts to sink the putt. While many brokers came close, only one person was able to make the shot. David Auel, of Avison Young, took home bragging rights along with the grand prize for being the only broker to make the putt.