Colliers International | Pittsburgh received the “Investment Sale of the Year, Industrial – Speculative” award from the Western Pennsylvania Chapter of the Society of Industrial and Office Realtors (SIOR) Annual Awards Luncheon last Thursday at the Rivers Club.

Gregg Broujos, Managing Director & Founding Principal, John Bilyak, Principal, and Justin Kline, Associate, received the award for the sale of the 31st Street Studios that occurred in the last quarter of 2017. New York-based North River Pittsburgh I, LLC purchased the 238,000 SF multi-industrial complex in the Strip District for $14 Million.

“As with any Special Purpose property, the success of a disposition can only happen when all parties work well together so that a “win-win” result is achieved,” Broujos said. “To that end, Colliers International had a great working relationship with the seller and their counsel, Lampl and Associates, the buyer and their counsel, Houston Harbaugh, and the many officials and attorneys involved throughout the court-approved sale process.”

31st Street Studios was formerly owned and operated by Gateway Entertainment Studios and was home to many film and television productions including Dark Knight Rises, Jack Reacher, Fences, Southpaw and Concussion.

“The sale of the 31st Street Studios property is yet another example of the high velocity of the Strip District commercial real estate market and brings yet another high quality investment firm to the Pittsburgh market,” said Gregg Broujos, Managing Director & Founding Principal of Colliers International | Pittsburgh, who served as the broker for the public auction.

“It was a team effort, but Gregg was instrumental in getting the property sold,” said Ryan Cooney, Lawyer at Robert O. Lampl Law Office. “With a bankruptcy case, there are more moving parts than your typical transaction, and Gregg was able to communicate well with everyone involved.”

According to their website, 31st Street Studios is home to many film and television productions with Sony Pictures, Paramount, and Netflix. Past productions include Dark Knight Rises, Jack Reacher, Fences, Southpaw, and Concussion.

Broujos commends Chris Breakwell, President and CEO of Gateway Entertainment Studios, for the phenomenal job he has done with the movie studio.

“It brings in an incredible amount of economic activity to the Pittsburgh region, and we really owe him a debt of gratitude for his work over the years and into the future.”

Broujos Gets Soaked for ALS

What is the best way to spend your lunch hour during the work week? Running errands, trying out a new restaurant, or watching your boss get soaked on purpose? Definitely the latter of the three!

Participating in honor of former colleague, Joe Fryz from Tarquincore.

A few of the participants, including Pirates CEO, Frank Coonelly, mentally preparing. 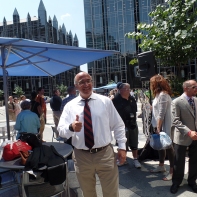 Gregg is all smiles before the soak.

Our office was able to experience this first hand last Thursday as our Managing Director and Founding Principal, Gregg Broujos, participated in the CEO Soak to raise funds for the ALS Association of Western Pennsylvania Chapter. Alongside a dozen other Pittsburgh CEOs, Broujos volunteered to stand in the PPG Place fountains as they went off for one minute.

“Colliers International was proud to participate in the inaugural CEO Soak to assist in the fight against ALS,” Broujos said. “Mike Daniels and the ALS Association / Western Pennsylvania Chapter did an incredible job of organizing this event and hitting their goal of $50,000.” 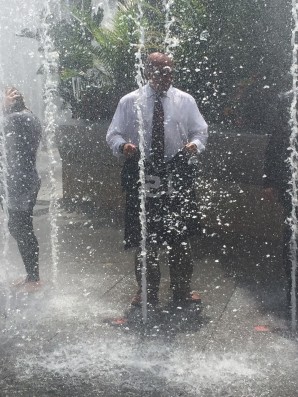 Our firm raised over $3,000 to help care for those directly affected by ALS.

Broujos added, “We were happy to honor our colleague, Joe Fryz of Tarquincore, who bravely fought ALS and showed us all how to deal courageously with this disease that we ARE going to wipe out.”

The participants after the soak.

Posted in Living Our Values, Pittsburgh

Comments Off on Broujos Gets Soaked for ALS