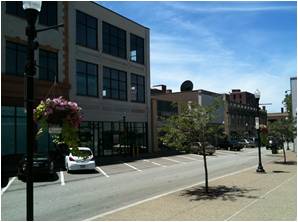 Hungry for retail tenants, East Liberty is placing orders, and Chef Kevin Sousa is serving up barbecue and dogs.

This makes Kevin Sousa doubly committed to East Liberty. While finalizing plans for Union Pig and Chicken, a Western Pennsylvania-style barbecue restaurant on North Highland Avenue, which was leased to Sousa by Colliers International | Pittsburgh in October, Post-Gazette.com reports he became interested in another vacant property.  In partnership with his brother, Tom Sousa, and Jay Fanelli, his new venture, Station Street Hot Dogs, was announced by Sousa on Twitter.  The restaurant, which seats about 65 people, will offer counter service, except for one table in the kitchen that will be able to be reserved. An adjoining lot offers ample parking, and outdoor seating will be available in warmer months.

“Kevin’s continued expansion in East Liberty is a testament to the corridor’s unbelievable transformation and Kevin’s commitment to Pittsburgh,” said Gregg Broujos, managing director and founding principal at Colliers International | Pittsburgh.  “Our firm’s clients who maintain holdings in East Liberty will be able to build off of the momentum from strong restaurant activity in the neighborhood.”

Colliers International | Pittsburgh announced the lease of 220 North Highland Avenue in East Liberty to Union Pig and Chicken restaurant, in October. The retail space, which features a 48-seat restaurant with a fully equipped kitchen, is undergoing construction renovations, and is expected to be complete before the end of 1st Quarter 2012.

Colliers International | Pittsburgh represents office and retail space for lease in East Liberty.  In just the past few years, this East End neighborhood has experienced a commercial development renaissance, highly conducive to business development. The neighborhood is home to Google’s local office. New retail stores, including The Home Depot, Target and Whole Foods have opened nearby and the business district has seen major public investments in infrastructure.