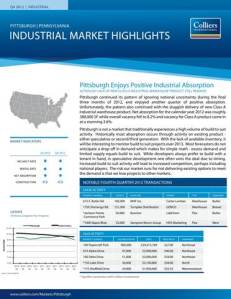 Pittsburgh continued its pattern of ignoring national uncertainty during the final three months of 2012, and enjoyed another quarter of positive absorption.
Unfortunately, the pattern also continued with the sluggish delivery of new Class A industrial warehouse product. Net absorption for the calendar year 2012 was roughly 388,000 SF while overall vacancy fell to 8.2% and vacancy for Class A product came in at a stunning 3.6%.

Pittsburgh is not a market that traditionally experiences a high volume of build to suit activity. Historically most absorption occurs through activity on existing product – either speculative or second/third generation. With the lack of available inventory, it will be interesting to monitor build to suit projects over 2013. Most forecasters do not anticipate a drop off in demand which makes for simple math – excess demand and limited supply equals build to suit. While developers always prefer to build with a tenant in hand, in speculative development one often wins the deal due to timing.  Increased build to suit activity will lead to increased competition, perhaps including national players. The risk our market runs for not delivering existing options to meet the demand is that we lose projects to other markets.

“The Colliers Pittsburgh Industrial team remains bullish on the demand for industrial space throughout our region, although our optimism is tempered somewhat by the lack of supply,” said John Bilyak SIOR, CCIM, Principal at Colliers International | Pittsburgh.  “We look forward to another active albeit challenging year, in that we will have to be especially creative in identifying solutions for our clients.”