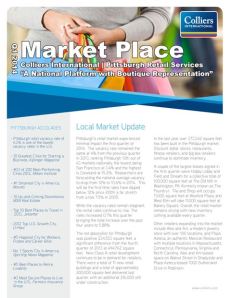 Pittsburgh’s retail market experienced minimal impact the first quarter of 2014. The vacancy rate remained the same at 4% from the previous quarter in 2013, ranking Pittsburgh 12th out of 63 markets nationally, the lowest being San Francisco at 3.4% and the highest is Cleveland at 15.2%. Researchers are forecasting the national average vacancy to drop from 12% to 10.6% in 2014. This will be the first time rates have dipped below 12% since 2009, a far stretch from a low 7.5% in 2005.

While the vacancy rates remain stagnant, the rental rates continue to rise. The rates increased 0.7% this quarter bringing the total increase over the past four years to 5.88%.

The net absorption for Pittsburgh was positive 234,553 square feet, a significant difference from the fourth quarter of 2013 at 494,762 square feet. New Class A retail development continues to be in demand for retailers. There were a total of 11 new retail buildings and a total of approximately 200,000 square feet delivered last quarter with an additional 216,000 still under construction.